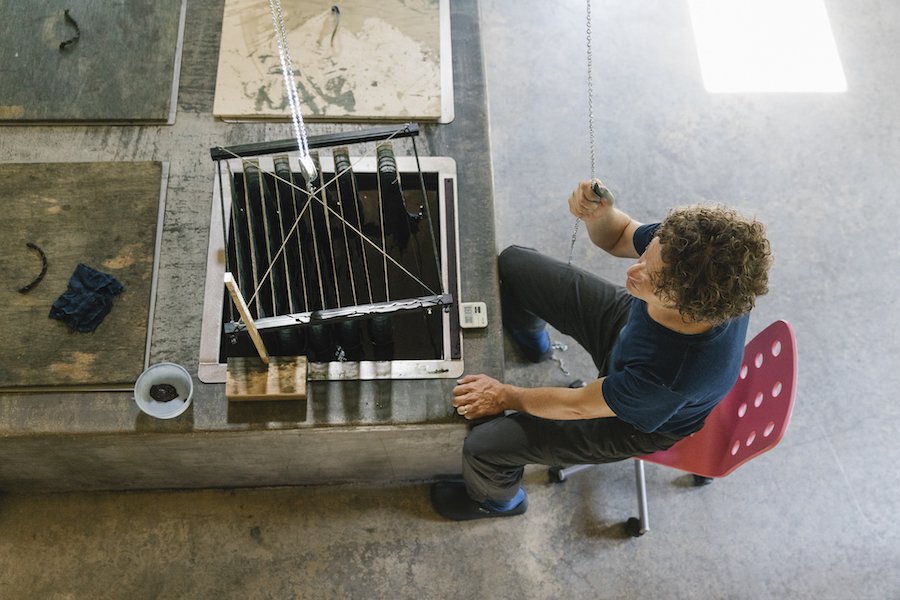 Husband and wife duo Rowland and Chinami Ricketts, are the power force behind Ricketts Indigo. Operating out of their micro-farm (or 'farmette' as Rowland's Mother likes to call it) - the pair not only grow and harvest their own indigo, but also create beautiful hand-made and hand-woven items.

Using natural materials and traditional processes to create contemporary textiles, Chinami hand-weaves narrow width yardage for kimono and obi and Rowland (taking breaks from his day job as a professor at Indiana University) hand-dyes textiles that span art and design.

We chat with Rowland on what keeps them inspired and how they hope their small venture makes big waves in changing the world for the better. 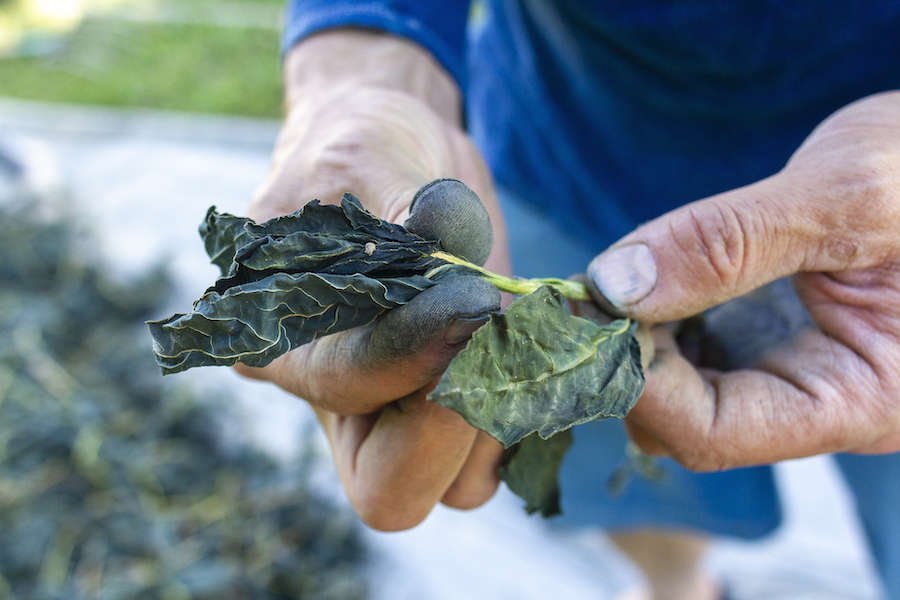 Let's start at the very beginning! How did you and Chinami meet? How lucky to have found something you are both so mutually passionate about!

Chinami and I met as apprentices with the Furusho family in Tokushima. She was interested in learning about indigo because she’s from Tokushima (where indigo was grown on the largest scale in Japan). Humorously, Chinami found the physical work of dyeing not to her liking, so she eventually pursued a second apprenticeship in kasuri. Chinami and I work together on growing the indigo and collaborate on some things like the felted stones, but largely she pursues her own work as a weaver while I pursue my installation and other artwork. We actually have separate studios because I like to listen to music loudly when working and she likes it silent! 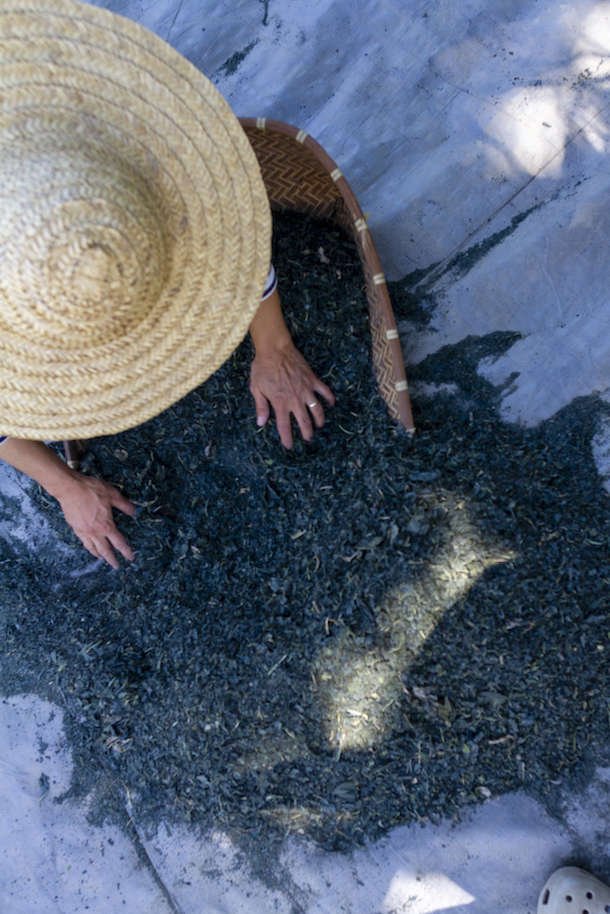 What first inspired you to start using indigo?

I got interested in natural dyes and indigo while living in Japan in the early 1990s. I had been doing a lot of black and white photography, and after moving into an old farmhouse I learned that all the grey water, including the chemicals I was using in the darkroom, were all going down the drain and directly into the streams and rivers in the rural community I was living in. I started looking for a way of creating that was less destructive and met some folks who were working with natural dyes who were extremely conscious of these issues. They, in turn, opened my eyes to the indigo tradition in Japan.

The process itself keeps me constantly inspired. We grow our indigo and process it into sukumo (the traditional Japanese dyestuff) using historical processes. It takes about a year to get from seed to dyed material. The nature of the process requires that we work with the seasons – starting seeds and transplanting in the spring, harvesting in the summer, composting in the fall and winter. There are always new challenges as well as new ideas that come out of this process.

I never get tired of using indigo though. It’s new and magical in a primal way every time something comes out of the dye vat and oxidizes, turning from green to blue right in front of me. I’ve seen it tens of thousands of times, but I never get tired of it! 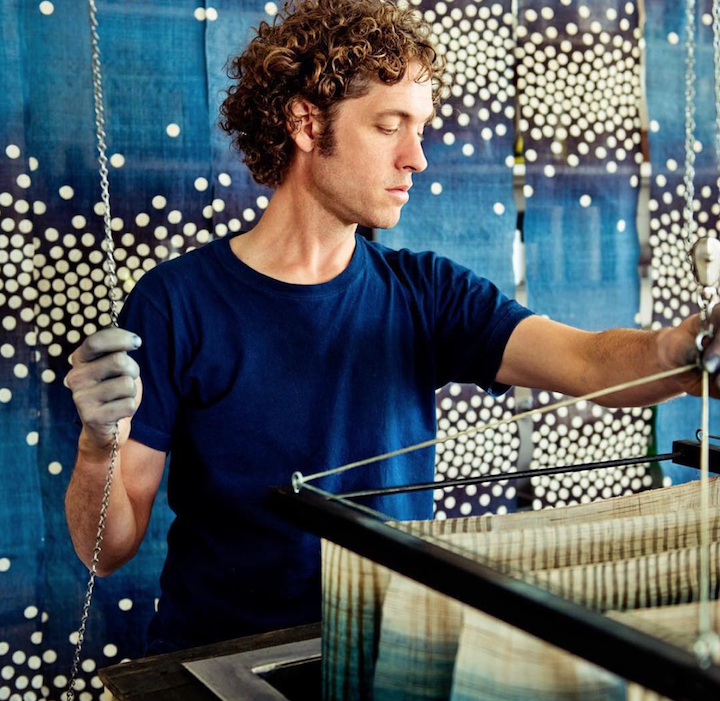 Growing your own indigo sounds like a lengthy process and a lot of work.

Growing indigo like we do is indeed a lot of work. Because I approach this as an artist, I’m interested in the idea of what it means to make something at a human scale. As a society we are conditioned to believe in bigger, better, faster, more and that scaling things up is the sole direction to go. I see scale and mass production as the problem that has led to overconsumption, waste, and environmental destruction. The scale of production for most consumer goods today is so great that we are unable to see from end to end. This distance enables a willful blindness and an out-of-site, out-of-mind attitude. In contrast, working on a human scale not only limits the amount we can produce, it also shrinks the distance of production to the distance of our own hands. 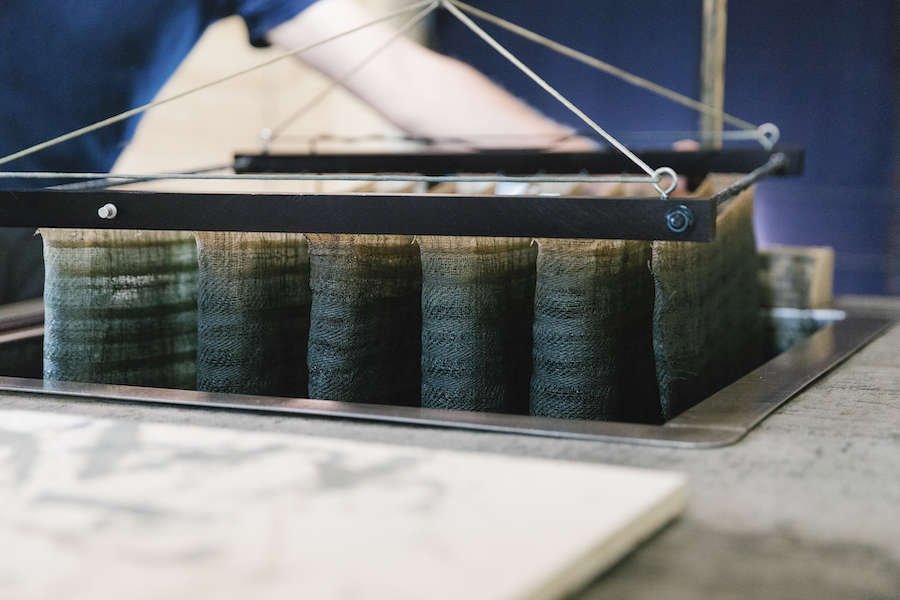 How do you incorporate your passion into your day job as a professor and convey it to your students?

Working with indigo has taught me that things happen slowly. We plant seeds in the spring for dye that we’ll use next year. I’ve learned to take the same approach in life – build the soil, plant seeds, and nurture things forward to fruition. Don’t expect immediate results, but work constantly and consistently towards your visions. 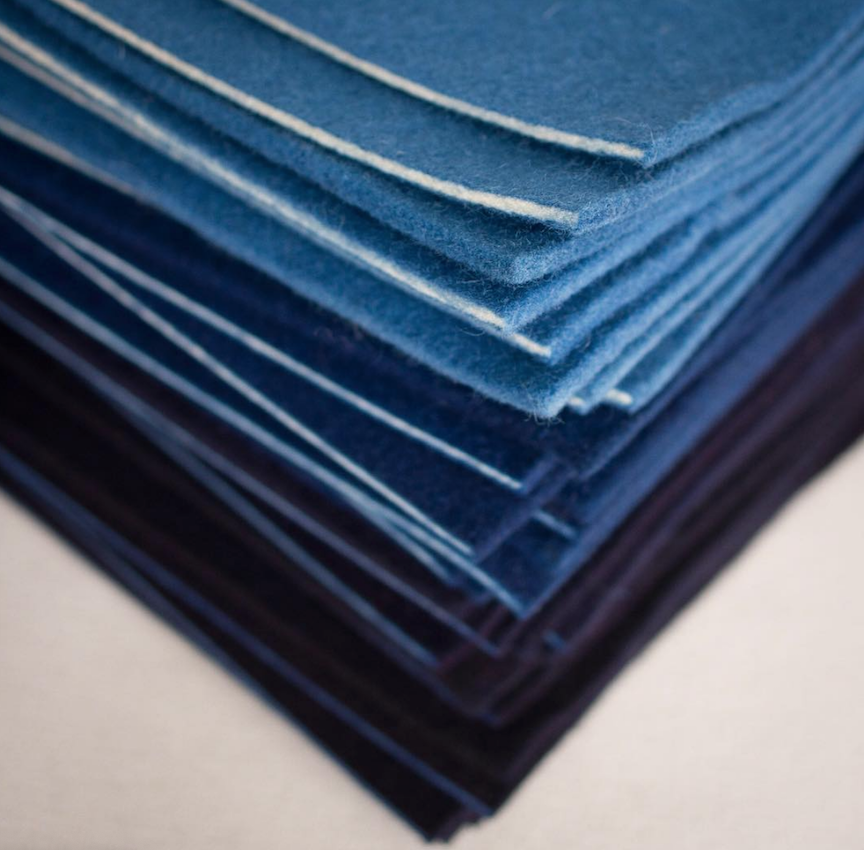 How did you find your time living and working in Japan influenced you?

I spent two years as an apprentice – a year on the farm of Osamu Nii learning to grow and process indigo, and a year with the Furusho family learning the ins and outs of the traditional natural fermentation vat as well as shibori and some basic paste resist techniques. One thing that’s left a lasting impression is the idea of tacit knowledge. This really hit home one day when turning a huge pile of composting leaves – work that, at that point, I had been doing day in and day out for weeks and weeks. Mr Nii quipped at me to get the tool we needed for the next task, and I responded (probably a bit annoyingly like my kids do when I tell them to wash their dishes or feed the chickens) that I knew what tool we needed next. Mr Nii immediately shot back very clearly, “No you don’t, because if you knew you would have already gotten it!” This is a different sort of knowledge, one based in action, and one that elevates action over words. On many levels, it’s the foundation of what I do today as a parent, teacher, artist, and farmer. 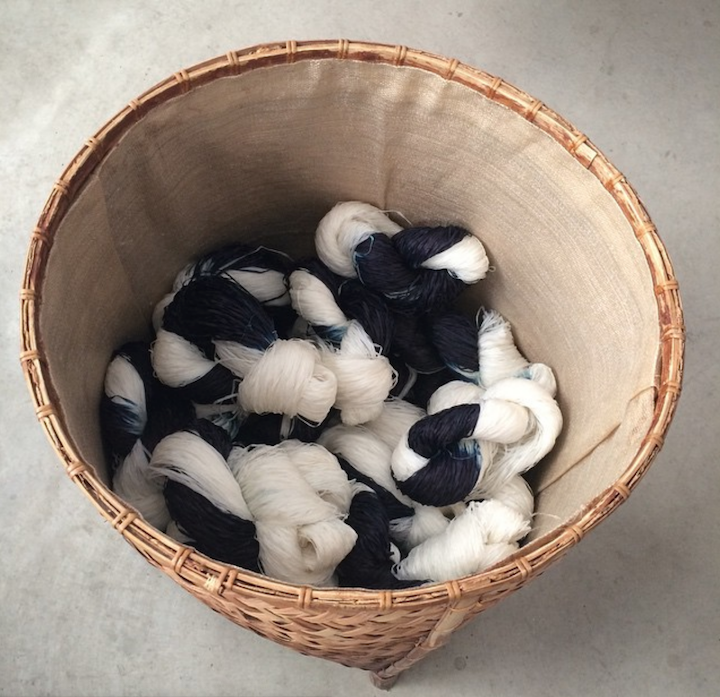 How do you decide what to work on next?

It depends, but much of what I do is driven by the indigo process – not just conceptually, but in the actual studio set up and the work we make. The vats themselves are living and have a lifespan of anywhere from 4 months to a year or more depending on how much they’re used. Ideally they’re used every day so that all the color we worked so hard to grow and compost is captured in cloth before the vat dyes and is recycled back on to the indigo fields to feed future crops. For my installations I tend to develop plans based on invitations to work in specific spaces. For other artwork, I’ve got more ideas than I have time, so there’s always something to pick up and run with. Chinami often works on commission with her weaving. The steps outside of dyeing, both in the farming and making, require a lot of time that keeps us away from the indigo vats. In an effort not to waste the dye while we’re working on other things, we started doing custom dyeing for people as well as dyeing the functional textiles with the help of an assistant. This allows us to thoroughly exhaust the vats before they die. 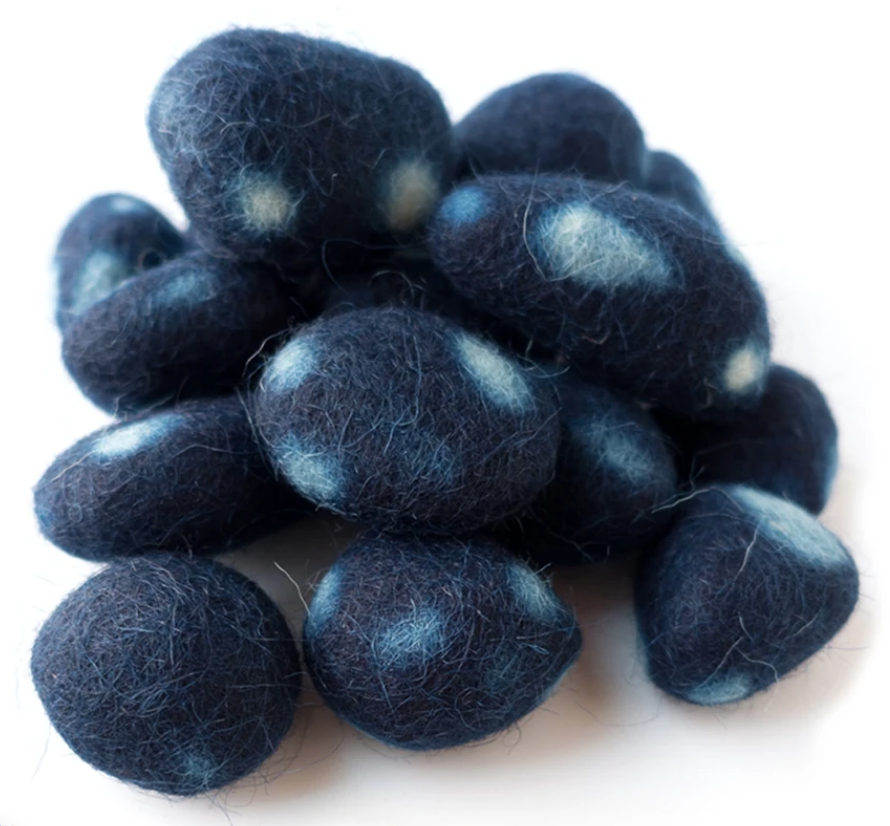 We have found the felt indigo stones have been so popular! What's the story behind these?

In grad school a friend ran a felting workshop and taught us the basics of 3D felting using a stone as an example. I was hooked because the stone itself was integrated/essential in the felting process. I took this a step further by using the weight of the stones pressing against each other in the dye vat to create the resist marks. I started doing them for fun, but then Chinami insisted that people would buy them, and she was right!